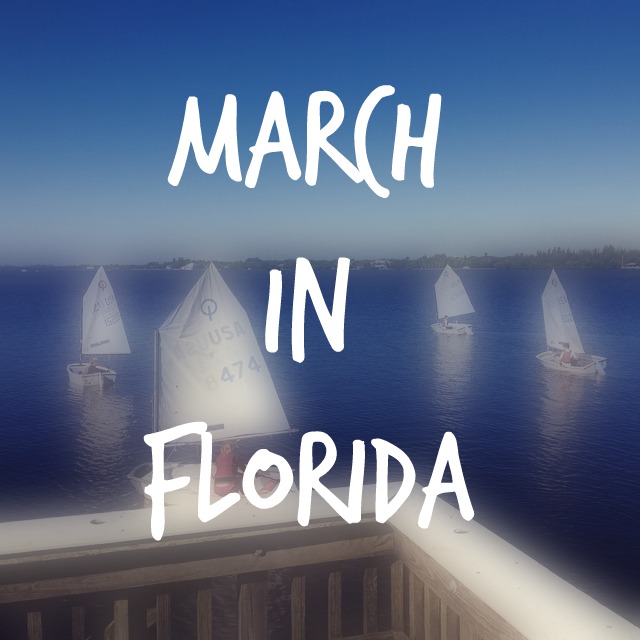 Our time in Florida – Part Two: We spent February in Louisiana (that’s in an upcoming post) but in March we came back to Florida – the southern areas.

(If you haven’t already, you can read about our first month in Florida HERE)

Rob’s speaking engagements drove where we went. First we were on the gulf side in Zephyrhills, next came a trek to the Atlantic side near Cocoa beach – and then back to the Gulf side and where stayed in North Fort Myers.

March weather in southern Florida was day-and-night different than our northern experience in January. We had sunny skies, and temperatures in the 80’s. Yes, a bit of paradise.

The first RV park, in Zephyrhills, was a sardine-city of trailers.

The good parts were their pool, and club-house library where we borrowed some DVDs and books. It was safe, and the people were friendly. We met a great number of people from Ontario, Canada!

Just as a FYI – a zephyr is a western wind. And the area is known for its bottled water – you might find them in your local grocery… I think I’ve seen them in North Carolina.

In Zephyrhills we had our first opportunity to swim since we began traveling almost a year ago! The laundry room happened to be adjacent to the pool, so we multi-tasked. 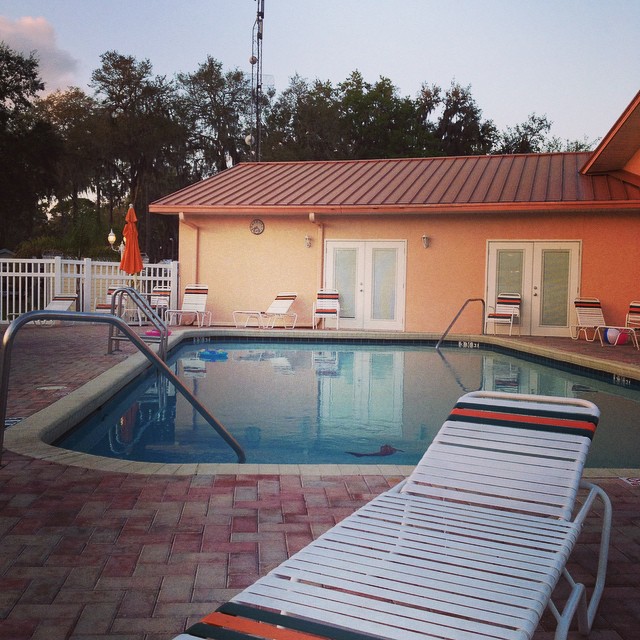 In March, some of the spots Robert presented were at Cocoa Beach, Palm City and Sarasota.

It’s been interesting to experience the diversity of groups and how each one manages their time, their networking opportunities and association “business”. I’ve been collecting real-life best-practice tips – perhaps when we’re done our tour, I’ll put them together and share them with the associations.

March concluded with a stay in North Fort Myers at the Tamiami RV Park.

As an RV park, it was unique to us – one half were mobile homes designated as a 55+ community, and the other half was for RVs. The entire park was owned by the community of mobile home owners, with their costs defrayed (or completely covered) by the RV park. As a 55+ community, we snuck under the radar – they didn’t require ID 🙂 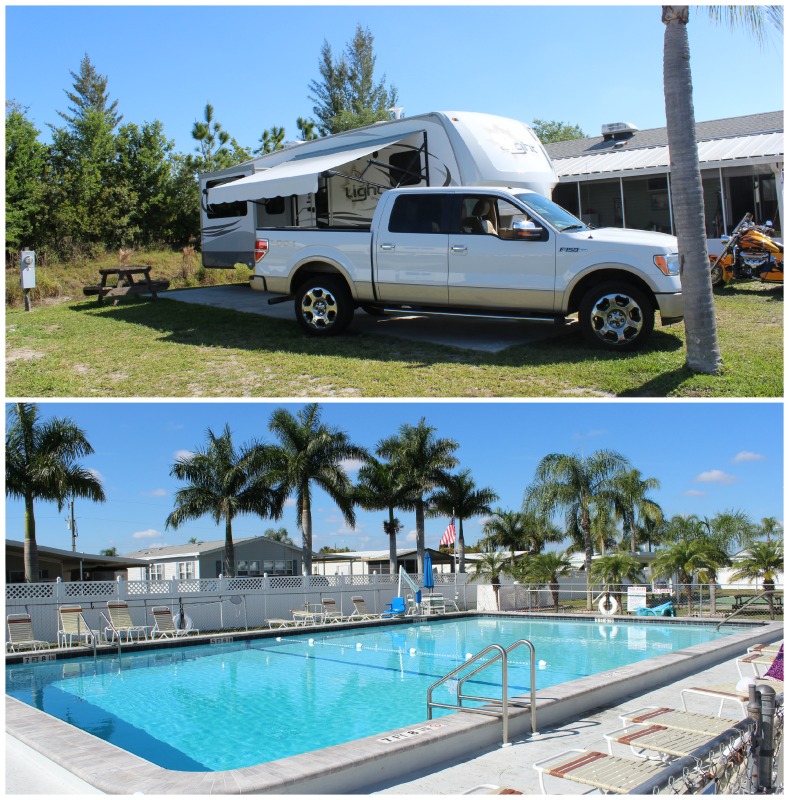 Because the weather was in the mid-80’s, we were able to swim often. Their pool was huge and deep, and a number of times when we swam we had it that huge pool to ourselves.  The blue sky with palm trees filled us with nostalgia – it reminded us of our pool during our time in Texas. 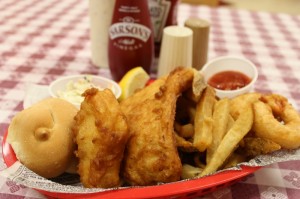 It’s an independent restaurant run by a father & son-in-law, both named John. Walking through the door felt like we’d found a bit of Britian – the Beatles music, the Union Jack flag, photos of spots in London and malt vinegar on the tables. 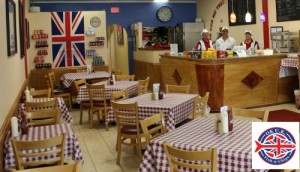 As we sat eating, I mentioned to the younger UK OK owner, John – that it would be nice if they had a website. They were doing everything else so well, including a brilliant logo… but it was difficult to find them online. He joked back, asking if I knew anyone who could build him a website.

Rob shook his head “no” at me.  (It’s funny when your spouse knows you so well, and can anticipate where your thoughts are heading… )

Guess what? Rob relented. I did build a website for them. Just a very, very basic WordPress website and earned a free lunch and a little bit of money. Check out their website: OK UK Fish ‘n Chips

We spent the day at the shop, working on a back corner table, taking photos of everything I could think of… including the British candy they sell.

(Note: I am NOT a website developer – I know only enough to get myself into trouble. But I do manage our own websites, and have fun messing with different themes. John Natanni (the younger) was very aware of my limitations, but my price was right, I guess.)

If you’re ever in North Fort Myers – stop in and enjoy their awesome Fish ‘n Chips!

The bridges between North Fort Myers and Fort Myers City became a favorite spot to view the Caloosahatchee River. Blue sky, blue water, and these huge bridges – what a beautiful sight. We could imagine living in one of those high-rises at the edge of the river… 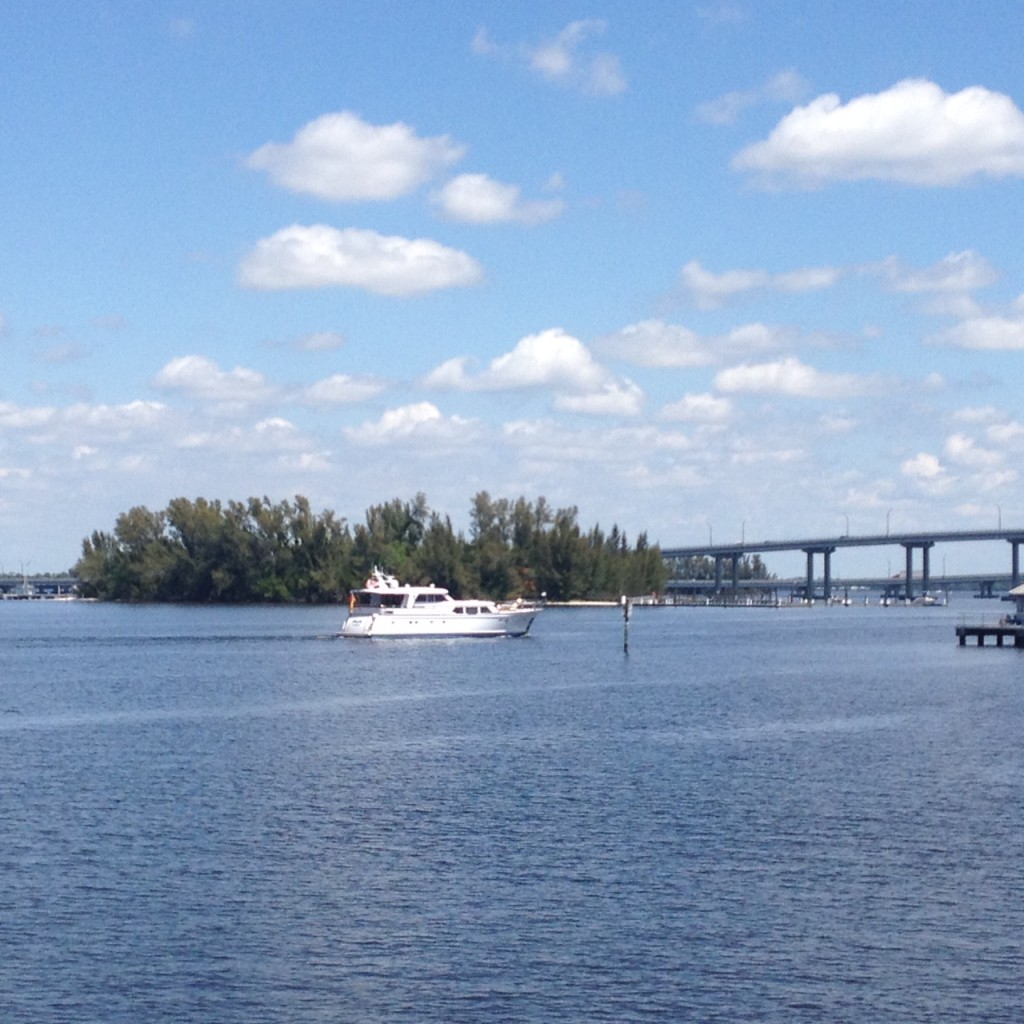 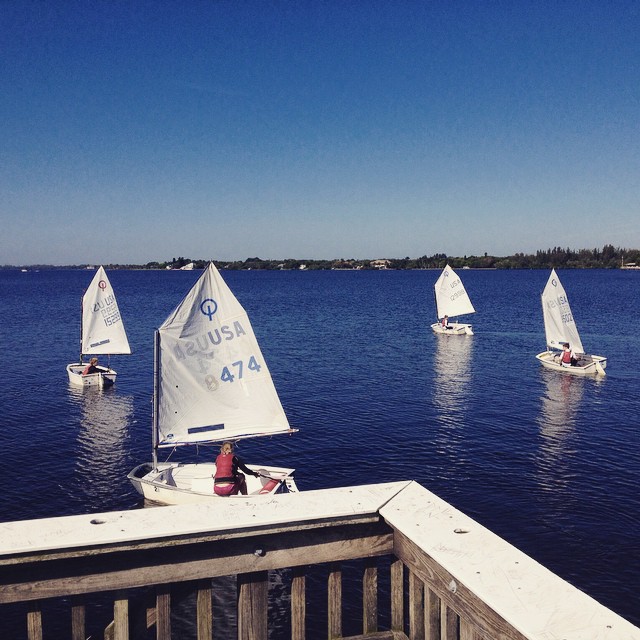 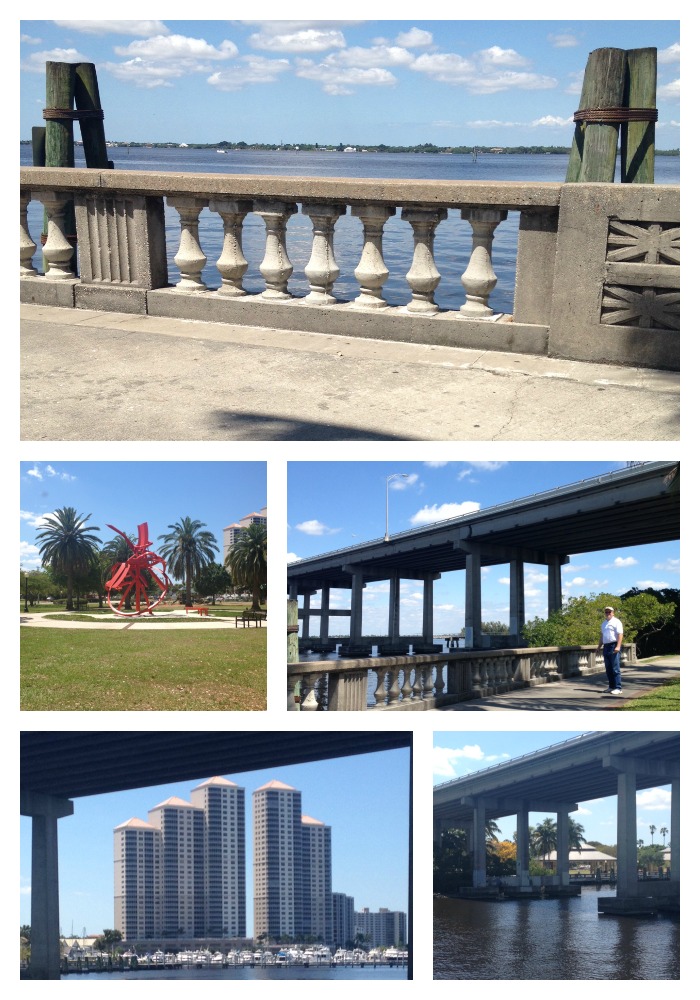 and then drove to one of three libraries in the area. 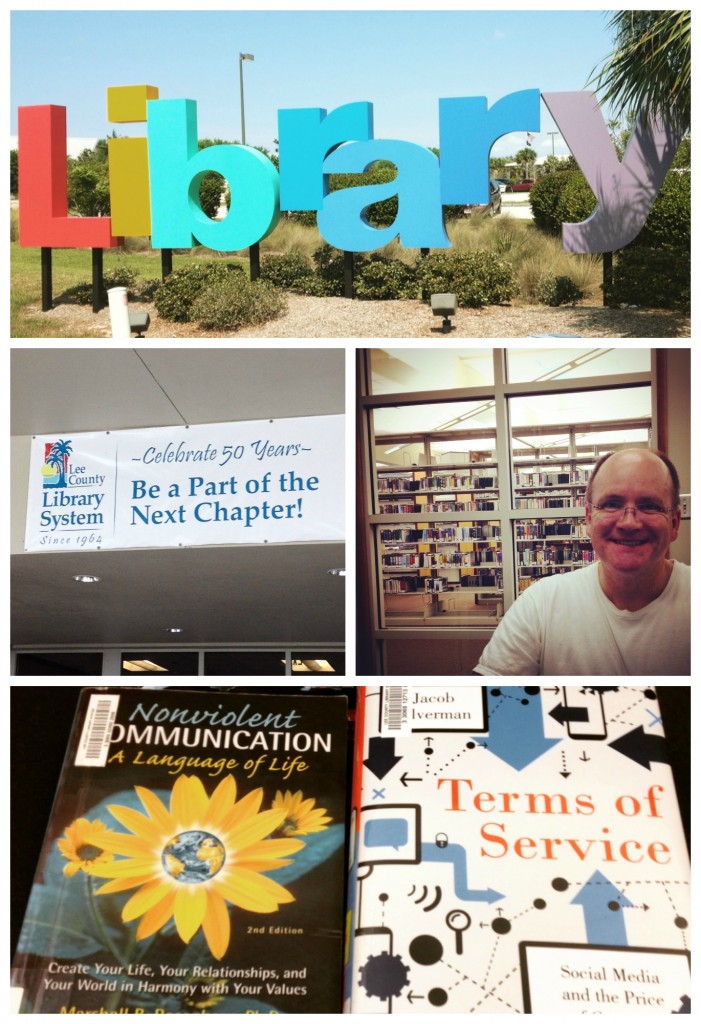 We spent time at three libraries in the Fort Myers area.

A little story from our time at one of the libraries:

This library system in Fort Myers area, unlike many others that we’ve experienced, has a strict silence policy. No talking. No cell-phones.

There’s even a security guard who patrols, walking through the library with a brisk manner, making sure all the patrons heed the policy. One day I was caught! I got the definitive “move outside” hand gesture when I was hiding behind some book stacks talking business with Alex on my cell-phone. 🙂  (Yes, I’m a rule breaker – I confess!)

We continued to come back to that library, but followed the rules.

One of the days following my little experience with the security guard, I was waiting for Rob at the front door at the library.  I sat down – with trepidation – on an outside bench  beside this security guard, all the while wondering how he’d respond, since I’d been a guilty culprit of violating library policy…

To make conversation, I casually asked him, “So – how’s your day going?”

He responded by telling me he had just gotten off the phone with his doctor. He proceeded to share that he’d had a biopsy on his face and the doctor had  just told him he needed to come back in for treatment – it was cancerous. Then he explained how his father had died from this type of cancer which started as a spot on an ear . The security guard was visibly shaken as he shared his thoughts and fears. We talked for a while.

I listened, and (hopefully) responded in an empathetic manner, while encouraging him. I promised to pray for him.

Later, Rob and I discussed how we need to never let our own fears, prejudices, or guilt keep us from talking with anyone. We never know where God needs us to listen, and intercede. We’ve continued to pray for Mr. B the security guard… Can I ask you to join me?

Meeting the police at the library.

At another library we noticed a patrol car in the lot. It had 5 value-words on the back end of the car. Of course, this caught Rob’s attention. 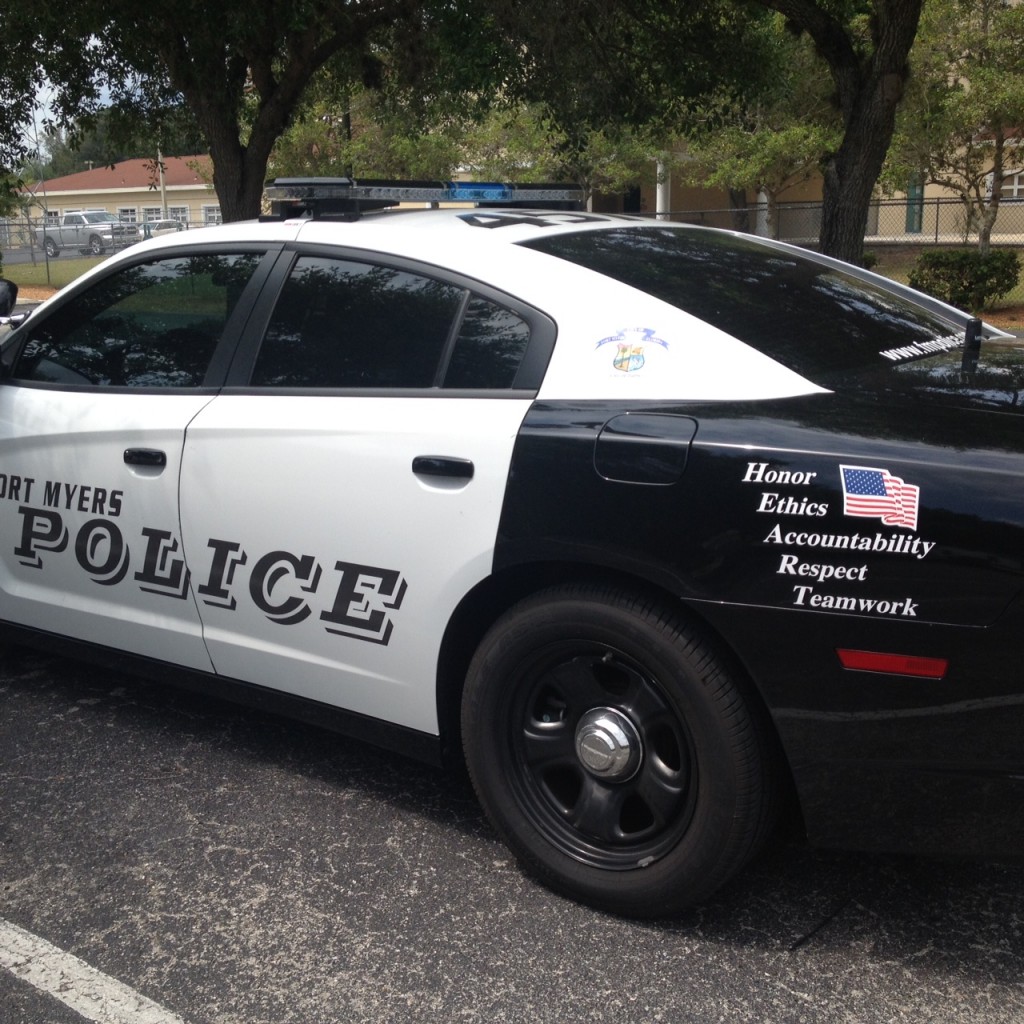 While we were inside working, Robert noticed the patrol officer in the library, and invited him to chat with us in our little study room. I’m not sure what the officer was expecting… he entered hesitantly.

Then Rob told him we noticed his patrol car with the values listed, and inquired if he knew the evolution of those values. Officer Robles relaxed, and even sat down at our table to explain.

Apparently the Fort Myers police are certified under an organization called CALEA – Commission on Accreditation for Law Enforcement Agencies – which, in addition to many other public safety policies, has a process for groups to create a set of values.

Unfortunately, there’s no value in the Fort Myers Police grouping of five which is unique. All five are a part of the 17 Common Values most organizations espouse. (Robert talks about this in his presentations.) This set does have a kitschy factor of the first letter of each word spelling out “HEART”.

See – you meet all kinds of interesting people – and learn many new things in the library!

When we were done in the library one day, we took a drive to Sanibel Island.

Sanibel Island is connected to the main area of Florida’s peninsula by bridge (It costs $6 toll to cross). Despite the cost, we decided we’d like the opportunity to see the sun set.

The island has two areas: Sanibel and Captiva. I’m  not really sure exactly where we went, but we drove as far as the road took us, and parked in a public lot, joining a host of other people all with the same desire to watch the sun set.

On the beach, there had just been a wedding – their flower petals the only trace left. 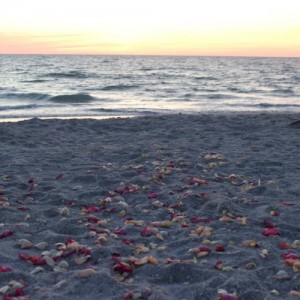 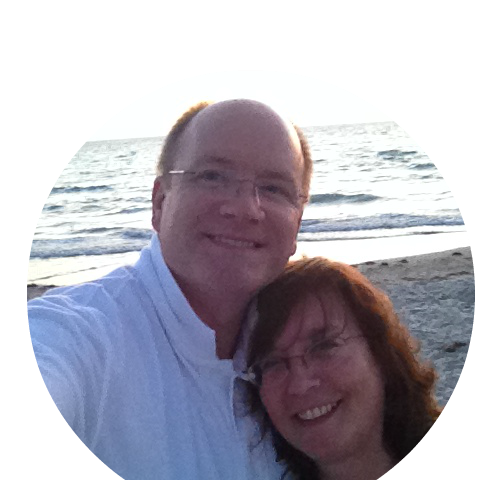 Do you feel a little bit relaxed?  Good…

The end of our time in Fort Myers coincided with Easter, and we were blessed to celebrate with fellow Christ followers there.

To begin the Easter experience, we spent an evening of worship with the youth group of the New Apostolic Church in Cooper City. The youth sang, and acted in a program which depicted a young woman, who, as a lawyer, interviewed different characters from Jesus’ life. The lawyer was deciding whether she should represent Jesus. Each character explained their view of Jesus and why He was truly Christ, the Son of God.

The characters included:  Jesus’ mother, Mary, some of the disciples, Barabbas (the criminal who was to be crucified, but was freed in exchange for Jesus taking his place), the centurion who nailed Jesus to the cross, and a young seven-year-old boy (who was an amazing actor) who pleaded for the lawyer to represent Jesus. They all stood up to advocate for Jesus – each for their own reason, with their own experiences of faith.

It was a thoroughly impressive performance by all, but more importantly, the youth conveyed their message clearly; “Do we stand for Jesus?” 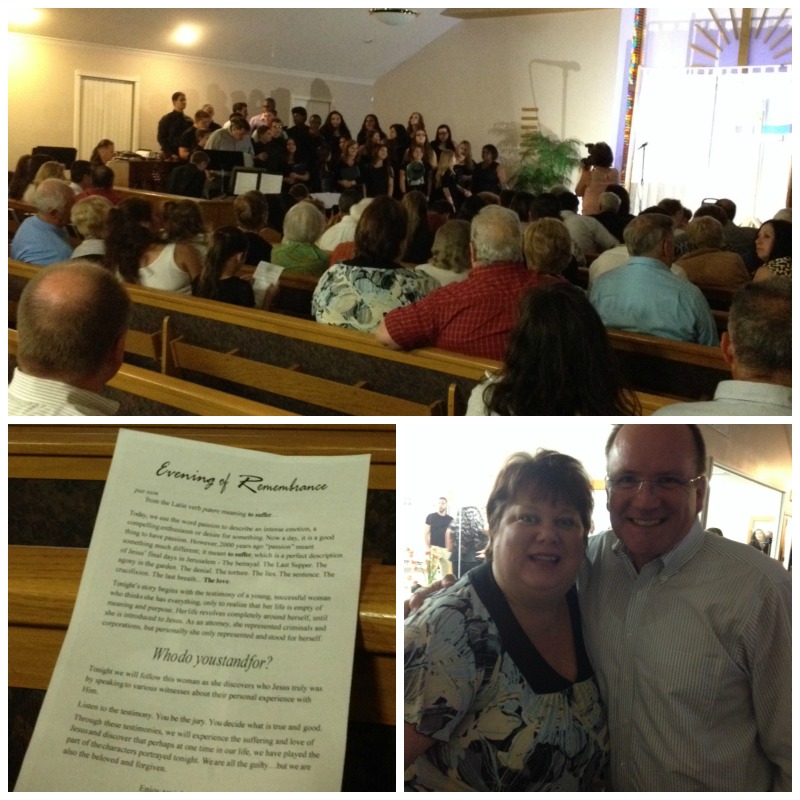 We were able to be in Fort Myers over Palm Sunday, Good Friday and Easter. The Fort Myers Church is so pretty – and we appreciated being able to worship together with new and old friends. 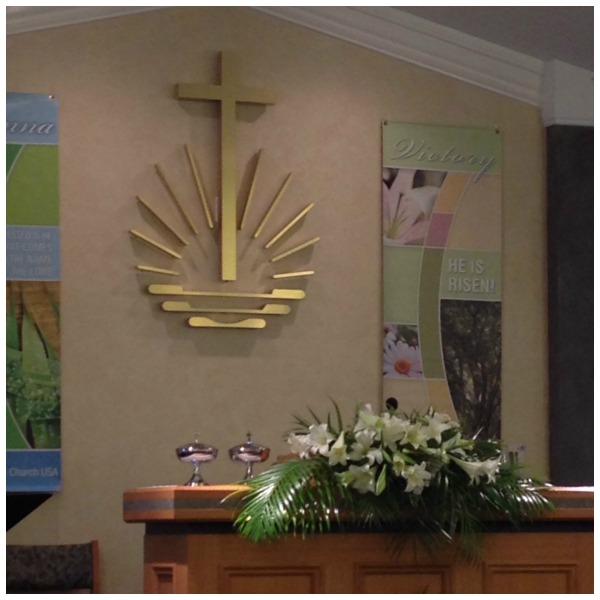 Living in Florida for Two Months.

Of course, we occupied ourselves with many other things – but we were living – not on holidays!

We still needed to do laundry, go grocery shopping, clean our little house-on-wheels, and we even took it in for a few repairs.

Robert spent a day and washed the outside of our fifth-wheel from the top of the roof, and all around. He also cleaned all the windows and it felt like brand-new again! Cleaning, shopping, laundry, work, and a bit of time with friends. Regular life… In the evening, after work was done, and we’d had our swim as exercise, we’d indulged in a little Downton Abbey or Big Bang – just like we’d do in any other part of North America.

So. Living in Florida for two months?

As I started the first post (here) – talking about living in Florida… here are our thoughts:

But so is every other part of the world, if you’re with the one you love, have the freedom to worship God, can afford the basics of life, and have the energy to do the work you love.

Something to think about:

Would you live any differently if you were in another place than you live now?

One curious thing we’ve learned in our 11 months on the road – the places and people may change, but you always bring yourself along for the ride. Your habits – good and bad , and your likes and dislikes travel with you.

(the next post I’m working on now is about our time in New Orleans and Shreveport Louisiana… stay tuned!)