A Taste of Hawaii in Shipshewana 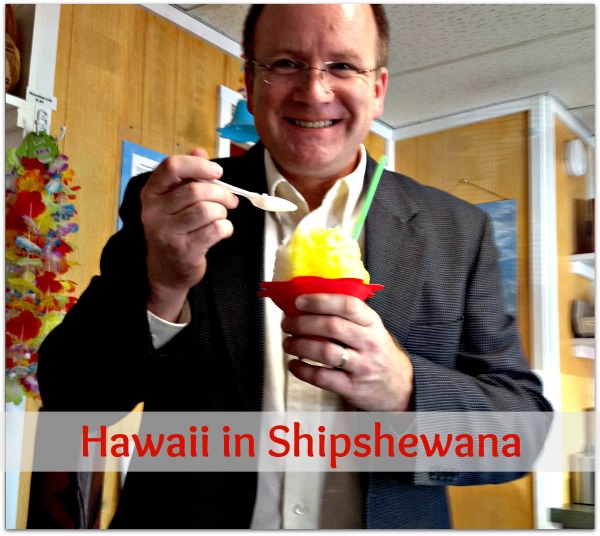 It wasn’t what we were expecting in the heart of Amish country. And it really wasn’t the weather for this bit of indulgence, but it sure was fun!

Robert had some meetings near Shipshewana, Indiana, so I spent my time touring the little tourist town. 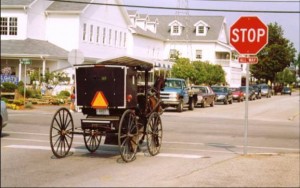 It was touristy Amish all the way – buggies, people in traditional clothing, home crafted oak furniture and butter-laden baking. But on the corner of one little street was a different kind of shop.

When Rob was done his meetings, I picked him up and brought him back for a bite of lunch.

Have you ever tried Shave Ice? 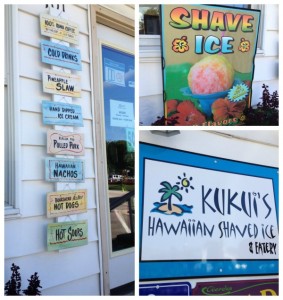 Kukui’s was the oddest out-take in this Amish country. We stepped through the door, and were immediately seranaded with the sounds of ukulele music. The owner, Cindy Powell in her bright tropical shirt, greeted us. 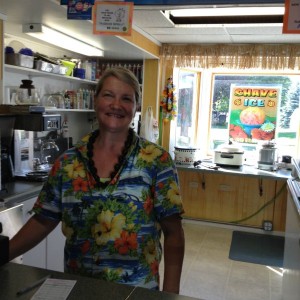 Beneath our feet, the floor was a tropical map, with blue water and palm treed islands.

We could smell coconut,pineapple and pulled pork, so that guided our choice of nachos with Hawaiian-style pulled pork, topped with pineapple relish and fresh mango salsa.

When were finished, it was time for our first ever taste of shave ice.

Shave ice is not a snow cone!

That became clear as we read the history of shave ice. This is an explanation from Kukui’s website:

The shave ice we know and love today is believed to have been invented in the port town of Yokohama, Japan in 1869. Due to its popularity, by the 1920’s shave ice was a common attraction in stores throughout Japan.

Japanese migrant plantation workers brought shave (no “d”) ice to Hawaii around this time and enjoyed it as a refreshing break in the hot tropical climate.

They would use their machetes to shave flakes off of large blocks of ice, then placed the shavings in a cup and poured different juices on top. They sold the frozen confection on Sundays since it was the immigrant’s only day off. When the migrant workers moved off the plantations, they opened their own family-run grocery stores and shave ice went commercial.

Authentic Hawaiian shave ice starts with a solid block of ice that is spun across a razor-sharp blade, creating shavings of fine, fluffy, soft snow. The shavings are then gently packed into a cup with special care to preserve the soft fluffy texture. Next, refreshing, fruity flavors are poured over the top, being absorbed throughout.  The result: Flavor in every bite!

Here are all the flavor options: 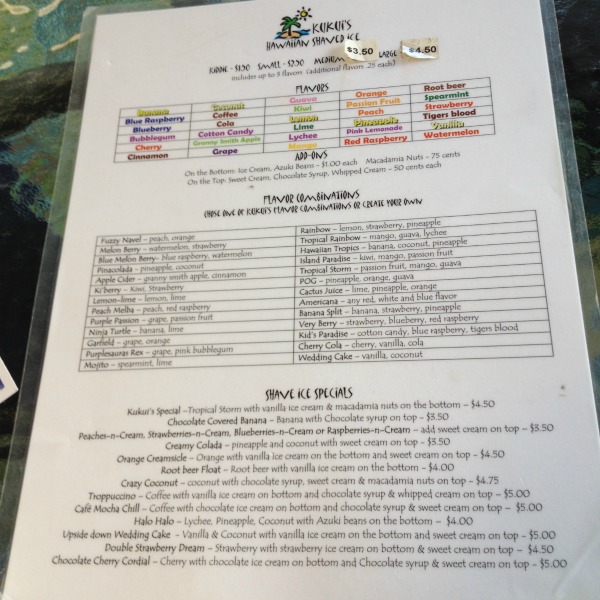 Robert read a book about what to do in Shipshewana as we waited for Cindy to create our choice: a Pinacolada with coconut and pineapple flavoring.

At the bottom was a surprise… a gumball! (Fun, right?)

A video of Cindy making our Shave Ice:

Where did the idea come from?

Cindy decided to open her business after experiencing Hawaiian shave ice for the first time while on vacation with her husband in Kauai, Hawaii. She began with a cart, as a seasonal offering. Then, making use of a small business resource center, and creating a full business plan (even though she says she’s not naturally number-oriented), she moved into her current, year-round spot.

Her advice to individuals wanting to open a new business?  Immerse yourself in the local environment. Join the Chamber of Commerce, volunteer, and make use of all the local opportunities to promote your business. She initially took her cart to local festivities, and catered for area picnics, etc.

How did we hear about Kukui’s? They’re ranked number 1 on Trip Advisor in Shipshewana!

Robert and I both agreed that Cindy had a great marketing idea by putting such a different offering in a traditional center. She ensured she was unique in her area, and she pulled off the experience with pizzazz, incorporating all the senses.

Have you ever tried Shave Ice?

Want to know other things to do in Shipshewana?

101 Things to Do in Shipshewana